The outcry surrounding women’s clothing and the lack of pockets is nothing new. It’s been a problem recognised by just about anyone that wants to carry like anything since forever. When I was younger I’d console myself with the idea that it was a money saving sacrifice. I can sew, pockets would be an absolute time-consuming bitch to add to clothing. Sounds reasonable?  I’m all for a bargain and certainly couldn’t afford any designer labels to prove my theory. So, it was a justified sacrifice to affordable fashion I could live with. Then I had a baby boy.

Not being a fan of pastels and ‘soft’ baby fashion, he owned a pair of 000 jeans before he was even born.  Yep, jeans with not one, not two, but FIVE functioning pockets.  I guess newborns have a lot of things they need to carry, pacifiers, breath mints and all of their mother’s hopes of ever fitting back into their pre-pregnancy wardrobe or jumping on a trampoline again without their insides falling out.  Big human clothes in miniature versions are super cute though, right? We can deal with the fact that our babies have more on-the-go storage options than us mothers for the sake of fashion?  Lucky these milk-engorged breasts allow me to store my mobile phone AND a dummy in my cleavage. Sadly, when I whip the credit card out of those sweaty babies due to both arms being full of said pocketed up baby and other seemingly important stuff, the shopkeepers are less than impressed…

The lack of pockets sparks some pretty entertaining debate.  My very favourite conspiracy theory is that handbag companies pay designers to leave us with nothing more than ‘fake’ pockets to force us to buy handbags. It’s a pretty solid theory when you think about it, and I do have a decent handbag collection, so it’s probably working for them. I doubt these designers have seen how excited we really get when we do find pockets, especially in a dress. Ohhh a dress with pockets.  That is the stuff dreams are made of. 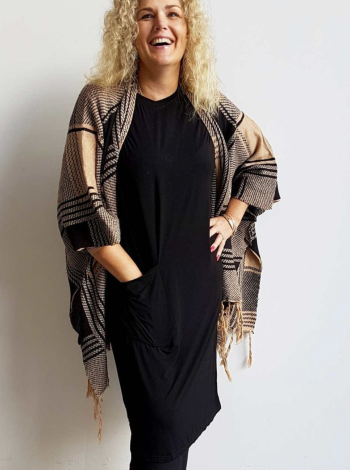 She’s just found a pocket on her dress and it’s made her day! Image courtesy of Kobomo

But do you know who else appreciates a good pockets? Dogs.  Why else would my dogs new winter coat have pockets, functioning pockets?

That’s right, much to my pleasant surprise this winter I could purchase fully lined, semi-weatherproof, hooded with fake fur lining, dog coats for the grand total of $9. What a bargain.  I mean the price alone was cause for celebration, but then I discovered not only that you could clip back the faux fur hoody, but it has a FUNCTIONING POCKET! That’s right, my dog no longer has to worry about where he will carry his emergency tampons, paracetamol, house keys or phone because he has an actual usable pocket on his back. Never mind that he has no opposable thumbs to get that shit out of his pocket nor the ability to reach his front leg around to that part of his back, but he can if he wants to! Yep, this is the world we are living in. Where dogs have pockets and women don’t. What the actual fucking fuck?

A fake pocket for aesthetic reasons I can appreciate, but a real pocket on a dog coat all for $9?  Meanwhile women around the world are replacing phone screens every few months because they are constantly dropping everything they are forced to carry in their hands!

Even he thinks it’s ridiculous.