Everyone was making all sorts of cool glass baubles last Christmas, but by the time I tried to source the actual baubles to do anything with, they were sold our or $6 each – errr, nah.  But I found some in Spotlight in August this year and grabbed them so I didn’t miss out again! 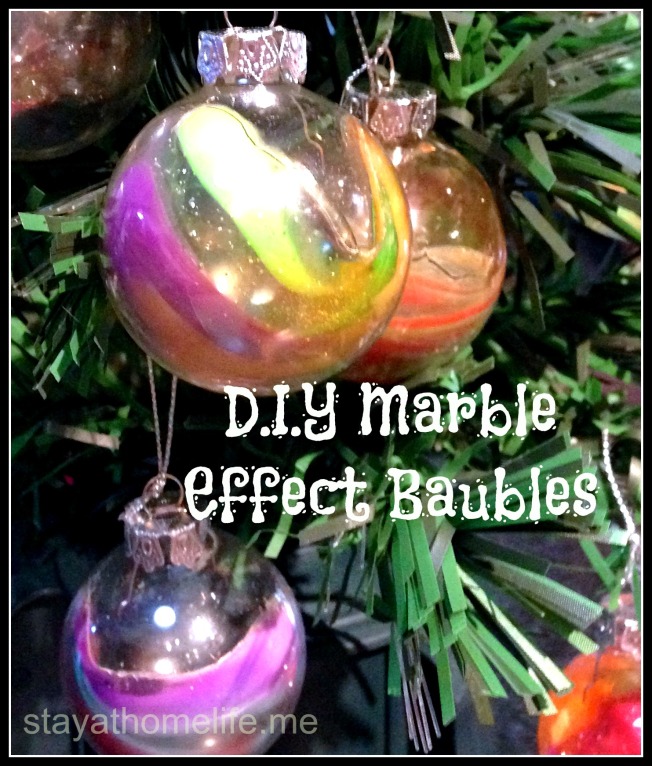 I got the 2 different sizes available at spotlight, but for this project we just used the smaller ones.   The process really is so simple it barely requires explanation.  The beads are just plastic pony beads, you can find them in either the craft section or the ‘girls’ toy section of most variety stores.  The ones that turned out the best were about 2/3 transparent beads and 1/3 solid colours.  We did one with just transparent beads, but it ended up all kind of mixing together and turning brown, which was disappointing.  If you don’t have a well ventilated kitchen, it would be a good idea to do these outside on the bbq, but the beads surprisingly don’t let off much fumes compared to other melting plastics I have played with.   I had the oven set to just over 220c.  You will need to keep checking on them every 5 – 10 minutes and turning as desired to create the marble effect.  We used a silicone muffin and chocolate tray to position them after each turn and plastic tongs to handle them with.  I ended up adding some extra beads to a few half way through the process, and just used a tea towel to hold them while they were hot.

Ms4 filling up her ‘rainbow’ bauble

Ready for the oven 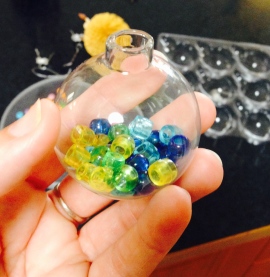 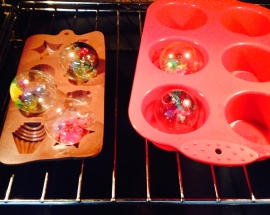 As they cooled down out of the oven, they did make a popping sound, which I thought was the glass breaking – but it was just the plastic separating from the glass inside a few of them.  There you have it, marbled Christmas baubles.